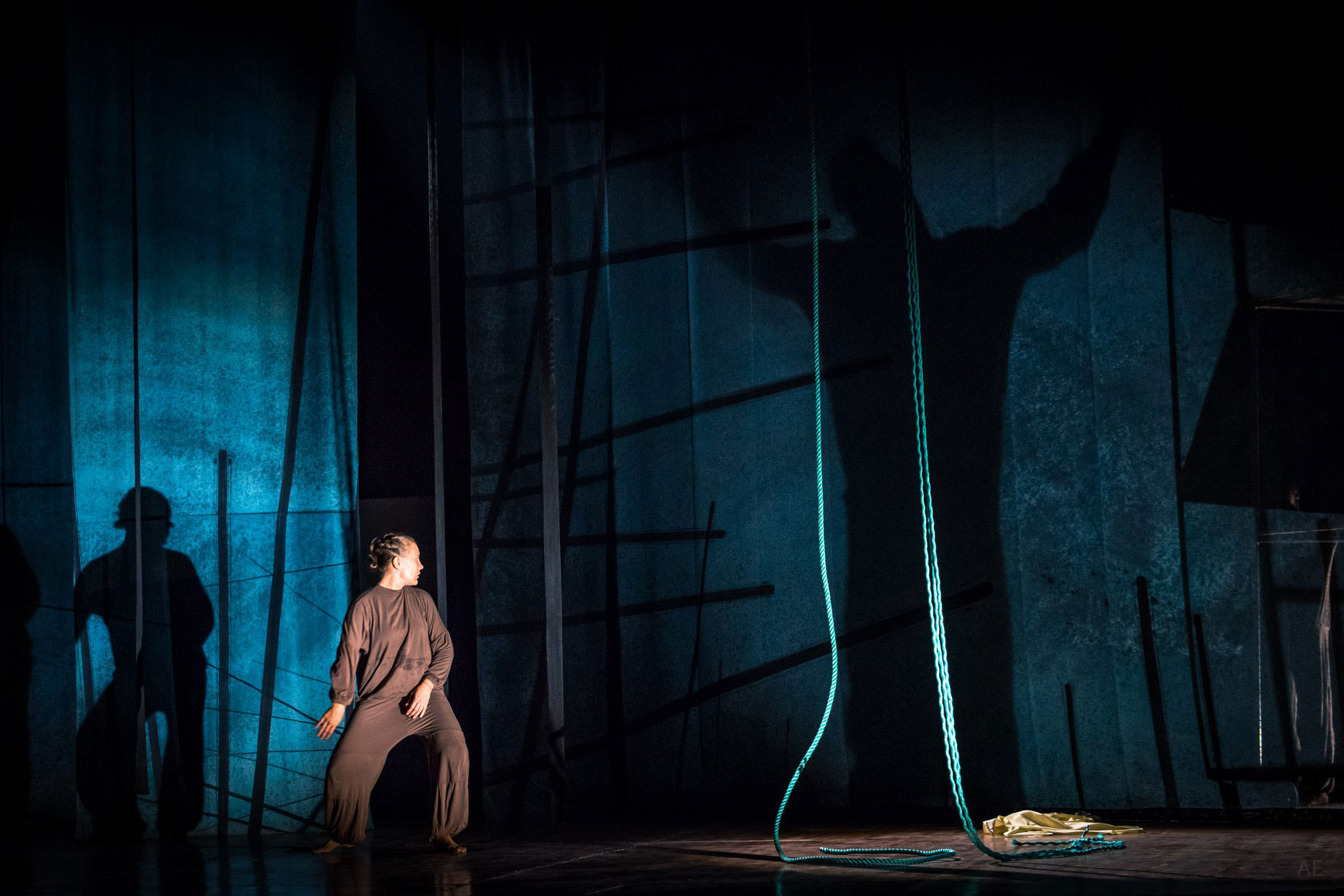 There was an Estonian symbolic story about The Master and his dog and monkey. Dog and monkey wait every day for their master to come home, but on one day, he just will not come. So on this day, their ordinary life begins. And they are locked together in one house- with their fear against the future and themselves. “It seemed to us that this is something, what we have to live every day, in our common situation. We are stuck together, in one imaginary space. We keep together because of our common fears, very often without real will to communicate. And the process is the same- we can become from beings to human beings only via real communication by releasing fear. With respect to otheanother person respect to ourselves. But until that- we are living on the Trash Fields because there is not any more space left.” says Tamur Tohver, author and director of the production. In Beings living place in Trash Fields, they find a wide variety of objects that once belonged to human beings: a phone, sunglasses, money, a mirror, clothes, a gun… etc. So suddenly, we see two beings, who … who are trying to behave like humans, similarly searching for themselves using human objects. We pass through a long scale of life. And this, in turn, will bring to the fore the question: does it make sense to admire today’s human being as a Human Being? Adapted and Directed by acclaimed Estonian director Tamur Tohver and featuring Nishant Saini and Steina Öhman, FEAR WALKERS presents us with an urgent message: find a way to overcome the fear of the Other, fear of our inadequacies, our supposed differences and our natural obstacles, or face extinction. Can we human beings – men and women – find a way to communicate beyond age, beyond race, beyond language? FEAR WALKERS is speechless and understandable to everyone!

“A play without words, FEAR WALKERS challenges us. “Our method: expressive physical theatre with subtext understandable to all. We transmit our message by ritual, sound, voice, rhythms. Because the story is in our bones,” says Polygon director Tamur. “The performance goal is to go into another way of communicating, abandoning performance as talk. In this piece, we use strong emotional landscapes and rhythms. Body as a message, emotion like diving, movement assign. From person to person, instead of a performer to audience.”

What next? However, if the beings are by accident a female and a male…? Woman and Man, the Son and the Mother, Father and Daughter, Mistress and… But if they have perhaps different colour skin? In today’s world, we allow ourselves to be guided by other partners or masters, whether as employers, presidents, or husbands. Our life depends mainly on what they are. Do we have enough awareness to ignore or support them?

We recognise ourselves on our best and worst days, humankind as a killer or a creator, using power. But, is this our destiny after all, are we worthy of being humans, this way as we are nowadays… Is there something to admire, to desire at all… ? And what should humanity be?

Friedebert Tuglas (2. 3. 1886 – 15. 4. 1971) was an Estonian writer and critic who introduced Impressionism and Symbolism to Estonian literature. He was the Estonian literary group Young Estonia (Noor-Eesti) leader at the beginning of the 20th century. He was one of the Estonian Writers’ Union founders and served as its chairman in 1922, 1925–1927 and 1937-1939. For more information, please find it here. His most famous short story is “Popi ja Huhuu”. Although the art of the short story remains important in Estonian literature– the Friedebert Tuglas short story award, founded in 1971, is one of the most important literary awards in Estonia. Author of edition-adaption Tamur Tohver (9. 5. 1969) is an Estonian director, actor, theatre practitioner and theorist, teacher and researcher. Active in the field since 1991. Founder of the Polygon Theatre (2008) and Polygon Theatre School (2009). Directed in theatre, for radio and TV, in different countries. This is precisely his 75th production. About the venue and the international community of Auroville, which: *belongs to nobody in particular. Auroville belongs to humanity as a whole. But, to live in Auroville, one must be a willing servitor of the divine consciousness. * will be the place of an unending education, constant progress, and a youth that never ages. * wants to be the bridge between the past and the future. Taking advantage of all discoveries from without and from within, Auroville will boldly spring towards future realisations. * will be a material and spiritual research site for a living embodiment of actual human unity. Read more about Auroville’s history here

For me it was very clearly a story not about two, but only ONE person- yourself. Your inner male and female side..

Very precise work, very simple story, but understandable for everyone. Your imagination stays free, at the same time as show takes you where ever you want. Very poetic, clear and clean, really enlightening!

Wonderful constant Miracle in whole story. No gap between meanings and actions. An hour went as a minute, breath taking…

We so loved the show! Enjoyed the theatrics of it. The actors were so in sync with each other. Congratulations to the whole team.

I missed party, but the play was great. Thx

Thanks for the unforgettable evening @ Bharat Nivas on 27th. Was fortunate to be there with brother ,2 sisters & b’ in-law. Enlightening show. BRAVO!

With Thanks and Appreciation! The piece called Fear Walkers that I saw This Sat. knocked me out. Oh yes, you could have gotten the idea of the play dance quickly. But the imagination creativity and subtly that was put into the stunning set, changing lighting to throw shadows, the constant intensity but centered performers male from here, female from Finland was riveting to me. Touches like coming out of a barrel realizing that maybe in all these centuries they had missed something about each other. Thanks to the cast, directors, and crew for this big treat.